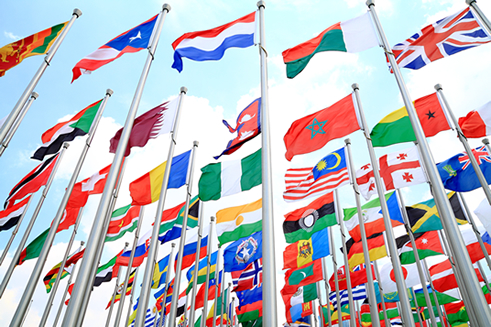 On May 14 and 15 2017, the first “Belt and Road Forum for International Cooperation” will be held in China, and will bring together some 20 heads of state and government. For Wang Yiwei, researcher at the Center for China & Globalization, this will be an opportunity for China to involve the international community in this development project.

The “Belt and Road” initiative launched by President Xi Jinping in 2013 aims to revive the ancient Silk Roads (land and sea roads) by constructing or modernizing energy and transport networks between China and Europe.

This project could be considered by some observers as a vehicle of influence of China on its neighboring states, especially in Central Asia. The “Belt and Road” initiative can also be seen as a way for large Chinese enterprises, especially state-owned enterprises, to expand their activities abroad.

While the US, under Trump’s presidency, seems to adopt a more protectionist policy, and that the European Union is facing disaffection from some of its members, China appears as a new leader of globalization and free trade.

The OBOR reflects this new Chinese policy, and for the Belt and Road initiative to be successful, it is necessary that this project be as open as possible.

2) The need for openness

Beijing has understand that the OBOR initiative cannot be  supported by China only, and thus Beijing tries to involve the largest number of states in this project, to reduce political and financial risks and create conditions for sustainable development.

First, the infrastructure projects related to the new Silk Roads involve a large number of states, including states suffering from political instability and facing terrorist risks. In spite of Beijing’s goodwill and large allocated resources, China will have to draw on the expertise and experience of all members of the international community to ensure the development of OBOR projects in the regions at risk.

The realization of the OBOR requires heavy investments to modernize all the infrastructures of communication and transport. China has made a $ 40 billion pledge through the “Silk Road Fund“, a sovereign wealth fund. Despite its importance, this budget should not be sufficient to actually build the “Belt and Road Initiative”. This project will require the financial participation of states other than China. This involves sharing the risks associated with the construction of these infrastructures. In Europe, major financial centers such as London, Zurich, and also Paris, Frankfurt and Amsterdam will have a role to play in financing these projects.

In order for the OBOR to be a real success, this project must not be limited to the construction of infrastructures, but must be followed by the setting up of new services, notably in the medical and financial sectors and the development of new industries and services; this requires the expertise of companies from all over the world, not just China.

The OBOR thus creates many opportunities for non-Chinese companies wishing to expand their activities in Asia; this project could lead to a greater opening of all the states located on the new Silk Roads.

2 thoughts on “The OBOR, a now global Chinese project”