On 21 August 2018, the newly elected Prime Minister Mohamad Mahathir announced the cancellation of three BRI projects in Malaysia, including the “East Coast Rail Link” (ECRL) and two pipelines. These projects were to be built by Chinese companies as part of the Belt and Road initiative. The Malaysian government had already announced the suspension of these projects on July 4, 2018.

Malaysia still involved in the BRI

This decision may be considered a renouncement of the BRI, but Malaysia remains involved in the initiative. Malaysia was one of the first states to join China’s new Silk Roads, and President Mahathir is not going to change this policy. During his meeting with Chinese President Xi Jinping in late August 2018, he said: “China’s Belt and Road Initiative will promote regional exchanges and cooperation, which will benefit all countries in the region” and stated that Malaysia was willing to actively participate in the joint construction of the new Silk Roads. 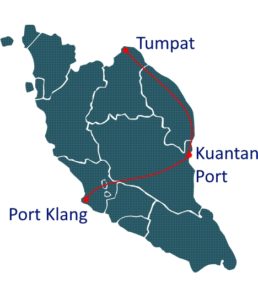 Mahathir’s decision is mostly a response to a domestic political problem. Debt reduction is one of the objectives of the new government’s agenda. Malaysia’s debts, $250 billion, may worry financial markets. Mahathir, therefore, hopes to reduce national debts of his country by canceling unnecessary projects.

On July 4, the new Malaysian Prime Minister announced the halting of projects and possible renegotiations with Chinese companies. But considering the new estimates, Mahathir preferred to cancel these projects.

On 4 July, the former prime minister, who lost the May 2018 elections, Najib Razak was indicted for corruption. Some members of the previous administration were reported to have received funds from 1Malaysia Development Berhad, a sovereign fund of Malaysia. The decision taken by Mahathir to cancel the BRI projects may put an end to certain practices.

The East Coast Railway Link project’s cancellation does not mean that all BRI projects in Malaysia are interrupted. Programs financed through private funds are maintained. Thus, the Melaka Gateaway program may continue. This project involves the construction of three artificial islands in Malacca and is expected to host a new deep-water port

Mohamad Mahathir also hopes to revive the “Look East Policy” he first inaugurated in 1982. It aimed then to attract foreign investors, mostly Japan, to develop industries in Malaysia.

The cancellation of the rail line project in Malaysia also shows us that the development of the BRI requires more coordination among states. The decision made by Mahathir seems reasonable because it may reduce his country’s debts, but new mechanisms should be put in place to share the financial burden of BRI projects among  Asian states. The creation of a China- Japan cooperation committee on rail issues is a first step, but we need to multiply this kind of initiative.

Malaysia’s Eastern  Coast Rail Link is a major section of the economic corridor that is expected to link Kunming to Singapore in the long run. It is necessary that China and Asian countries strengthen their cooperation to ensure the development of these projects.